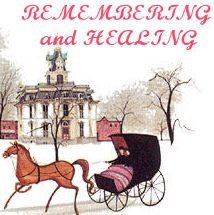 Robert Aubrey Rickerd, 86, the son of William Allison and Margaret Bernice (McMahan) Rickerd, was born May 12. 1935, in Oskaloosa, Iowa.

The Pence ~ Reese Funeral Home in Newton, has been entrusted with the arrangements. There are no services planned at this time. Memorials may be designated to Robert's family, or to a charity of your choosing. Burial will be in the Newton Memorial Park Cemetery.

In 1955, Robert moved to the Newton area. On June 22, 1956, Robert was united in marriage with Beth Ann Haines in Oskaloosa. He was employed by the Maytag Company for ten years, by John Deere for fourteen years, retiring from Parsons of Newton, after fourteen years of service.

Robert enjoyed the outdoors and attended the Newton Assembly of God Church.

Robert died on Thursday morning, May 27, 2021, at MercyOne Newton. Robert was preceded in death by his parents; his daughter Laura Gilpin in 2010; his brother Lester Leroy; his half-brothers: Claude and Jack; and his half-sister Lorena.

Those left to honor Robert's memory at that time, include his wife, Beth Ann; daughter Melody L. Allman; his three grandchildren; and several great-grandchildren.

Beth Ann Rickerd, 81, the daughter of Derrell Raymond and Rachel Pauline (Vought) Haines, was born November 3, 1939, in Montezuma, IA. She was a high school graduate of the Montezuma schools.

In 1956, Beth moved to the Newton area. On June 22, 1956, Beth was united in marriage with Robert A. Rickerd in Oskaloosa. She had devoted her life to her husband and family and attended the Newton Assembly of God Church.

Beth was preceded in death by her parents; her husband Robert on May 27, 2021; her daughter Laura Gilpin in 2010; her two brothers; and one sister. The Pence ~ Reese Funeral Home in Newton, has been entrusted with the arrangements. There are no services planned at this time. In lieu of flowers, memorials may be designated to Beth's family, or to a charity of your choosing. Burial will be in the Newton Memorial Park Cemetery.

Those left to honor Beth's memory include her daughter Melody L. Allman; her three grandchildren; several great-grandchildren; and her four sisters.

To send flowers to the family or plant a tree in memory of Robert Rickerd, please visit Tribute Store

Share Your Memory of
Robert
Upload Your Memory View All Memories
Be the first to upload a memory!
Share A Memory
Send Flowers
Plant a Tree