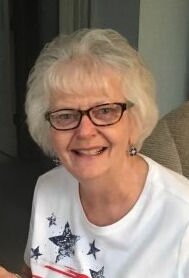 Please share a memory of Marilyn to include in a keepsake book for family and friends.
View Tribute Book

Marilyn Joan Hansen, the daughter of Merlin Melvin and Mary Ann (Tool) Morris, was born June 10, 1935, in Jasper County, Iowa.  She attended Rushville #6 and graduated from the Kellogg high School with the class of 1953.

On November 4, 1956, Marilyn was united in marriage with Al Hansen at the Kellogg United Methodist Church.  Marilyn worked at the Maytag Company in the mailroom and darkroom.  Once she and Al started their family, Marilyn stayed home and did daycare until her five daughters were raised.  She then worked for Kmart for several years and enjoyed her ladies and coworkers at Rock Communications.  Marilyn was a member of the Kellogg United Methodist Church.

Marilyn died on Monday, November 21, 2022, at Park Centre, Garden View in Newton, Iowa.  She was 87 years old.  Marilyn was preceded in death by her parents; her husband, Al, on August 22, 2011; a son-in-law, Howard Feinstein; and her brothers, Marlow Morris in infancy and Melvin Morris.

To send flowers to the family or plant a tree in memory of Marilyn Hansen, please visit Tribute Store
Print
Sunday
27
November