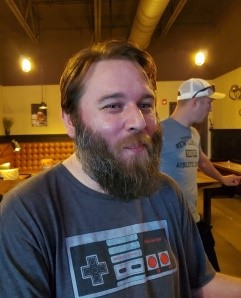 Please share a memory of Brandon to include in a keepsake book for family and friends.
View Tribute Book

Brandon Robert Starbeck, the son of Don and Debbie (Joyce) Starbeck, was born August 26, 1984, in Des Moines, Iowa. He attended Newton Community Schools and was graduated from Newton Senior High School with the Class of 2003.

Brandon lived in Johnston, Iowa and was working at Barnes and Noble in West Des Moines, Iowa. He was very close to his family and was an avid reader and enjoyed board games and Anime.

Brandon died on Monday, August 1, 2022, at the University of Iowa Hospital and Clinics in Iowa City, Iowa. He was preceded in death by his grandparents and his father.

Those left to honor the memory of Brandon include his mother Debbie Starbeck of Newton, brother Andrew Starbeck of Altoona, Iowa and his cousin, who was like a brother, Jason Joyce of Johnston, Iowa, and several aunts, uncles, nieces, nephews and friends.

To plant a beautiful memorial tree in memory of Brandon Starbeck, please visit our Tree Store

A Memorial Tree was planted for Brandon
We are deeply sorry for your loss ~ the staff at Pence~Reese Funeral Home and Cremation Services
Join in honoring their life - plant a memorial tree
Services for Brandon Starbeck
There are no events scheduled. You can still show your support by planting a tree in memory of Brandon Starbeck.
Plant a tree in memory of Brandon
Print
Online Memory & Photo Sharing Event
Online Event
About this Event