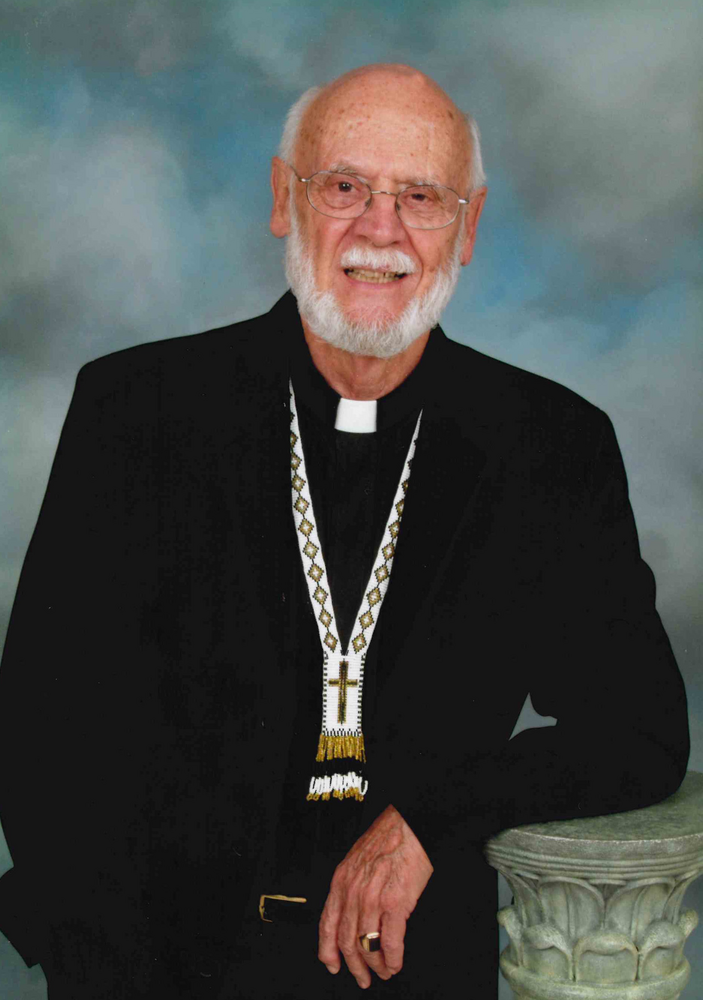 Please share a memory of Frederick to include in a keepsake book for family and friends.
View Tribute Book

Reverend Canon Frederick F. “Fritz” Kramer was born on June 16, 1926, in El Paso, Texas: the son of Reverend Dr. Paul S. and Gay (Batchelder) Kramer, He was united in marriage to Carol Annette at St. Columba’s Episcopal Church on June 21, 1956.  He attended St. James Military Academy in Faribault, Minnesota, through 8th grade. He graduated from Evanston High School, Evanston, Illinois. At this point, he joined the United States Army, serving, 1944 to 1946, in the Philippines and Occupied Japan.

He returned to complete his education receiving his BA from Northwestern University, Evanston, his MA from Berkley/Yale Divinity School, New Haven, Conn.

Fritz, Father Kramer, Archdeacon Kramer served his first churches of Samuel Memorial, Naytahwaush, St. Philip’s, Rice Lake, on the White Earth Reservation. He was appointed to become Archdeacon for Indian Work in the Diocese of Minnesota.  He became involved with the plight of Indian youth sent to reform schools for truancy. He set out his goal to establish the Archdeacon Gilfillan Treatment Center for tribal youth in Bemidji, Minnesota. He was also appointed by 3 different governors to the Fair Employment Practices Commission. He received an outstanding service Citation of Episcopal Community Services from the Diocese of Minnesota.

In 1966 he moved to serve St. Stephen’s Episcopal Church in Newton, IA. He became the Chaplain at Skiff Medical Center. He helped establish the Hospice of Jasper County in Iowa, where he served as Chaplain for 20 years. He was a member of Rotary since 1960 and was a longtime O.P.E.N. Board member and Foster Care Review Board member, member of the Hillcrest Family Services Board of Trustees Fritz was honored to be a part of sponsoring the HaThi family as they resettled in the US following the Vietnam War. He hosted many guests from other countries through O.P.E.N./ IRIS/

Friendship Force from countries including England, Ukraine, Taiwan, Scotland, Russia, Croatia, Nigeria. Opening his home to young political campaign organizers, the NPR RAGBRAI Team, “No Pie Refused” and two presidential candidates. He was honored by the Iowa Filipino Americans for service in WWII, He received a Certificate of Appreciation from the Thai Dam People of the United States for “wholeheartedly assisting the Thai Dam people in making their new life and searching for their freedom”.  He received an Appreciation award for “unique and sustaining contribution to the community mental health center movement by the Iowa Community mental Health Centers Association of Iowa, Inc.

Fritz was a humble man who opened his heart, his church and his home to any stranger or one in need.

Fritz died at his home in Newton surrounded by his family on Tuesday, March 29, 2022. He was 95 years old. Fritz was preceded in death by his parents.

Memorial Services will be held at 2:00 p.m., Saturday, April 23, 2022, at St. Paul’s Episcopal Cathedral, 815 High Street, Des Moines, Iowa. The family will greet friends Friday evening from 5:00 until 7:00 p.m. at the Pence ~ Reese Funeral Home in Newton. Memorials may be designated in Fritz’s name to the