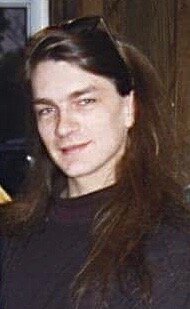 Please share a memory of Michael to include in a keepsake book for family and friends.
View Tribute Book

Michael Shawn Anderson, the son of Eugene Marvin and Carole Edna (McAnally) Anderson, was born September 22, 1963, in Newton, Iowa.  He attended Newton Senior High School with the class of 1982. Mike was an incredibly talented drummer and a true musical genius. He was driven by and had a deep connection to music at a very young age. His passion for perfecting sound and playing with real artistry, in respect of his craft, was evident.

At age 18, Mike moved to Atlanta where he became an integral part of the music scene, playing with bands such as The Dirty Blonz (aka The Blonz), who opened for Bon Jovi, Meatloaf, Extreme, Warrant and other big names. He often sat in with The Hellhounds (aka The Georgia Satellites), played for DiamondBak, replacing Bob Burns (formerly of Lynyrd Skynyrd) and on Mr. Dirty with Rhett Forrester (of Riot) to name just a few. While very accomplished, Mike was extremely humble, lived simply, was always kind and never hesitated to share his sweet smile with others. He proudly worked for Avatar Events Group for over 35 years and was a regular contributor at Rehearse Too Much in Atlanta.

When not creating music, Mike loved cooking, working out and analyzing musical arrangements…”Listen to this part,” he would often say. A spiritual and gentle man, Mike believed in spreading kindness, sharing positive vibes and operating on a higher frequency.

Mike died Wednesday, December 1, 2021, at Mercy Hospice in Johnston, Iowa.  He was 58 years old.  He was preceded in death by his grandparents. Those left to honor Michael’s memory include his parents, Eugene and Carole Anderson; his brother, Chris Anderson (Vera) and his children, Lindsey (Josh) Pline and Matthew Anderson; his sister, Heidi Anderson (Lamb) (Randall Biehl) and her children, Tanner Lamb, Trevor Lamb, Gabriel Lamb, Molly Lamb, Nathanael Lamb; his sister, Heather (Frank) Battaglia and their children, Tonino Battaglia and Mila Battaglia; his honorary sister, Mary (Reid) Nakamura and their children, Austin Nakamura, Alex Nakamura and Anderson Nakamura; the love of his life, Thea Woodall and her children, Zachary Gill, Dylan and William Yancey, who he helped raise and her ten grandchildren; his extended family; and his best friend and sidekick, Carlos, “the dog”.

Funeral services will be held at 2:00 p.m., Monday, December 13, 2021, at the First United Methodist Church in Newton.  A Facebook Live broadcast will begin at 2:00 p.m. Monday on the Pence Reese Funeral Home and Cremation Services Facebook page.  A time of visitation with the family will be from 2:00 until 4:00 p.m., Sunday, December 12, 2021, at the Pence ~ Reese Funeral Home in Newton.  In lieu of flowers, the family has requested memorial contributions to the Michael Anderson “Gift of Music” Memorial Scholarship Fund.  Please make check payable to Carole Anderson, which may be sent in care of Heather Battaglia, 3809 Arpent Street, St. Charles, MO 63301.

To send flowers to the family or plant a tree in memory of Michael Anderson, please visit Tribute Store
Print
Sunday
12
December