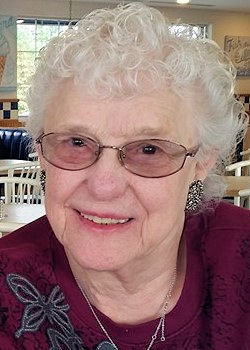 Obituary of Dorothy A Waiksnis

Dorothy A. "Dodie" Waiksnis, 89, formerly of Newton, passed away November 27, 2021, at the UnityPoint Health Center in Marshalltown.

A funeral service for Dodie will be 10:30 a.m., Saturday, April 16, 2022, at the Pence Rees Funeral Home in Newton, who have been entrusted with the arrangements. Memorials are being designated in Dodie's name to the Newton V.F.W., the Newton American Legion or the Newton Moose Lodge.

Dodie, the daughter of Arie and Hattie (Bruxvoort) Olsthoorn, was born July 25, 1932, in rural Jasper County, Iowa. She attended rural Jasper County schools and graduated in 1949, from Kellogg High School. After graduation she moved to California, where she met her first husband, Alvin Copelin. Alvin passed away in 1987.

In 1997, Dodie married Joseph Waiksnis and they made their home in Wyoming, Arizona and Montana, before moving back to Iowa. She worked as an accountant/bookkeeper for several local businesses. She was a member of the ladies auxiliary of the VFW, having held several offices, including treasurer and president. She was a member of the Newton Christian Reformed Church. She enjoyed bowling, horses, Pony Express and her garden. She will be greatly missed by those who knew and loved her.

To send flowers to the family or plant a tree in memory of Dorothy Waiksnis, please visit Tribute Store
Print
Saturday
16
April