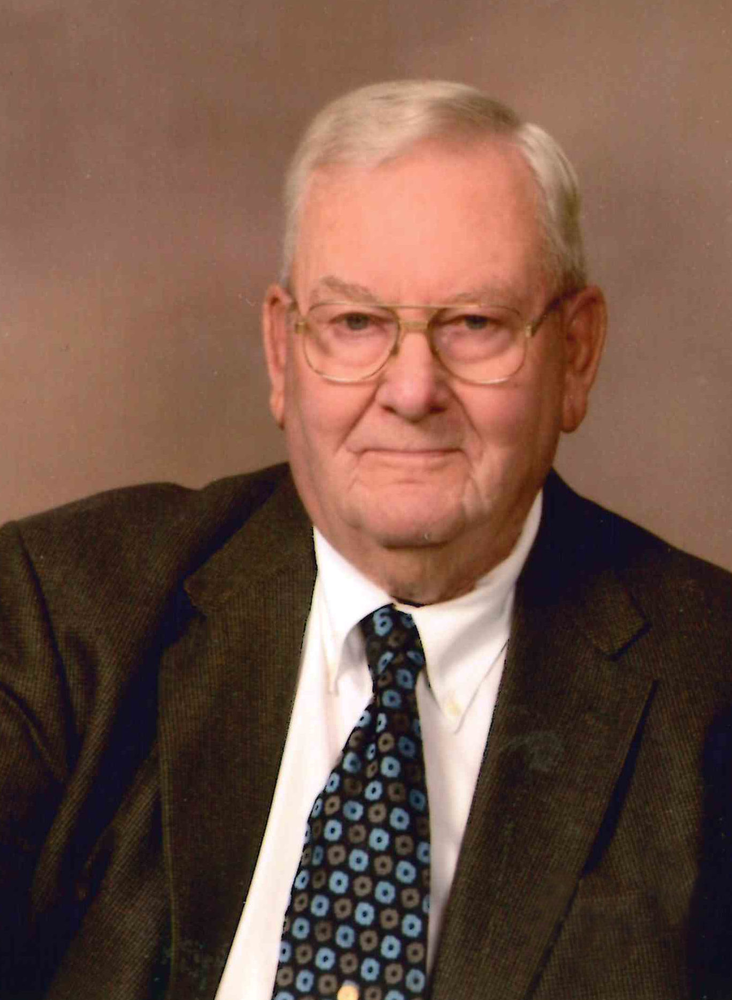 The fourth of six children, Jim was born on December 16, 1931 to James and Nellie (Baarda) Talsma.  The family moved to a farmhouse East of Colfax when Jim was 10, which is where he spent the next 75 years of his life and raised his own family.  In 1950, Jim graduated from Colfax Senior High School.  He proudly served his country in the United States Navy from 1950-1954, where he was stationed for some time on the USS Hornet aircraft carrier.  In 2016, Jim traveled to San Francisco to tour the Hornet and reminisce of his Navy days.

On September 1, 1955, Jim was united in marriage to his cherished wife, Bertha (Bert) Lois Zylstra of Sully, Iowa.  To their union, eight children were born.  Jim farmed for almost four decades before retiring in 1993.  Jim enjoyed visiting “the farm” often, especially during harvest season.

Jim was a curious soul.  He loved reading and learning, especially about geography and history.  Each winter, Jim spent hours reading the encyclopedias and read the entire set several times.  He could tell you all about the most remote places in the world and pinpoint them on the map.  He also loved watching jeopardy and was the person you wanted on your team when playing Trivial Pursuit (or any game for that matter).

Those who knew Jim would describe him as sharp witted, observant, and a great conversationalist.  He loved playing cards and other games – whether it was solitaire, Yahtzee, Farkle or Cribbage.  He had a knack for knowing exactly what card his opponent was going to play, and he often demonstrated great sound effects, intense facial expressions and hand motions during his play.  He loved good-natured banter, and he “told it the way it was”.  He and Bert enjoyed entertaining young and old alike at their home, which usually consisted of a great meal and long conversations while playing games.  Family and friends remember Jim giving great hugs and having a robust laugh.  He treasured his grandchildren and great grandchildren and loved spending time with them.  Many of them remember “Grandpa Jim” taking them on four-wheeler rides around his farm and introducing them to fishing, one of his favorite pastimes.

Jim also had a passion for travel.  Several times a year, he and Bert would take off on a whim to experience different regions of the country.  Family members smile when they think of the pristine yard Jim kept, even when his lawn consisted of 5 acres.  He never went anywhere without Roundup in his truck.

Most importantly, Jim was a man of great faith, which was evident in the way he lived his life.  He was a charter member of Newton Christian Reformed Church, and he loved his church and church family.  He spent his last hours on this earth reading scripture and prayers and listening to his favorite hymns with two of his children by his side.  He told his family that he was so grateful to have lived such a full and happy life and that he looked forward to meeting his Lord.

A celebration of Jim’s life will be held at a later date.  A private family burial will be held at Oakwood Cemetery in Pella, Iowa.  Memorials may be designated in Jim’s name and left at the Pence~Reese Funeral Home in Newton.

To plant a beautiful memorial tree in memory of James Talsma, please visit our Tree Store

A Memorial Tree was planted for James
We are deeply sorry for your loss ~ the staff at Pence~Reese Funeral Home and Cremation Services
Join in honoring their life - plant a memorial tree
Services for James Talsma
There are no events scheduled. You can still show your support by planting a tree in memory of James Talsma.
Plant a tree in memory of James
Print
Share A Memory
Plant a Tree