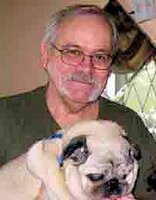 A visitation with the family and celebration of life will be held at the Newton American Legion Post #111, on Saturday, July 30, 2022, from 2 p.m. until 4 p.m..  Military honors will be conducted by the American Legion Honor Guard.  Memorials are being designated to American Heart Association and National Kidney Foundation.

On July 19, 1969, Jeffrey was united in marriage to Lorraine E. (Atwood) Potter in Newton. He served his country in the National Guard from 1970 until 1979 as Sargent First Class.  He worked for the Maytag Corporation, 35 years as plant manager for the Northeast Machining Center in Newton.  After Maytag closed, Jeffrey worked for the John Deere Corporation in Ankeny for 10 years and retired in 2013.

Jeffrey enjoyed sharing his home life with Lorraine for 53 years, and they had a long succession of beloved Pugs.  He loved tinkering around the homestead, gardening, and creating things in his workshop, traveling through the South West US with Lorraine (and Pugs) in their motor home and camping trips with his father-in-law.

Jeffrey died on Thursday, July 21, 2022, at his home in rural Newton, after a 6-year long battle with congestive heart failure and kidney disease.  Pence – Reese Funeral Home in Newton has been entrusted with the arrangements.

He was preceded in death by his parents, brother H. James Potter, sister-in-law Sharon Atwood and nephew Scott Atwood.